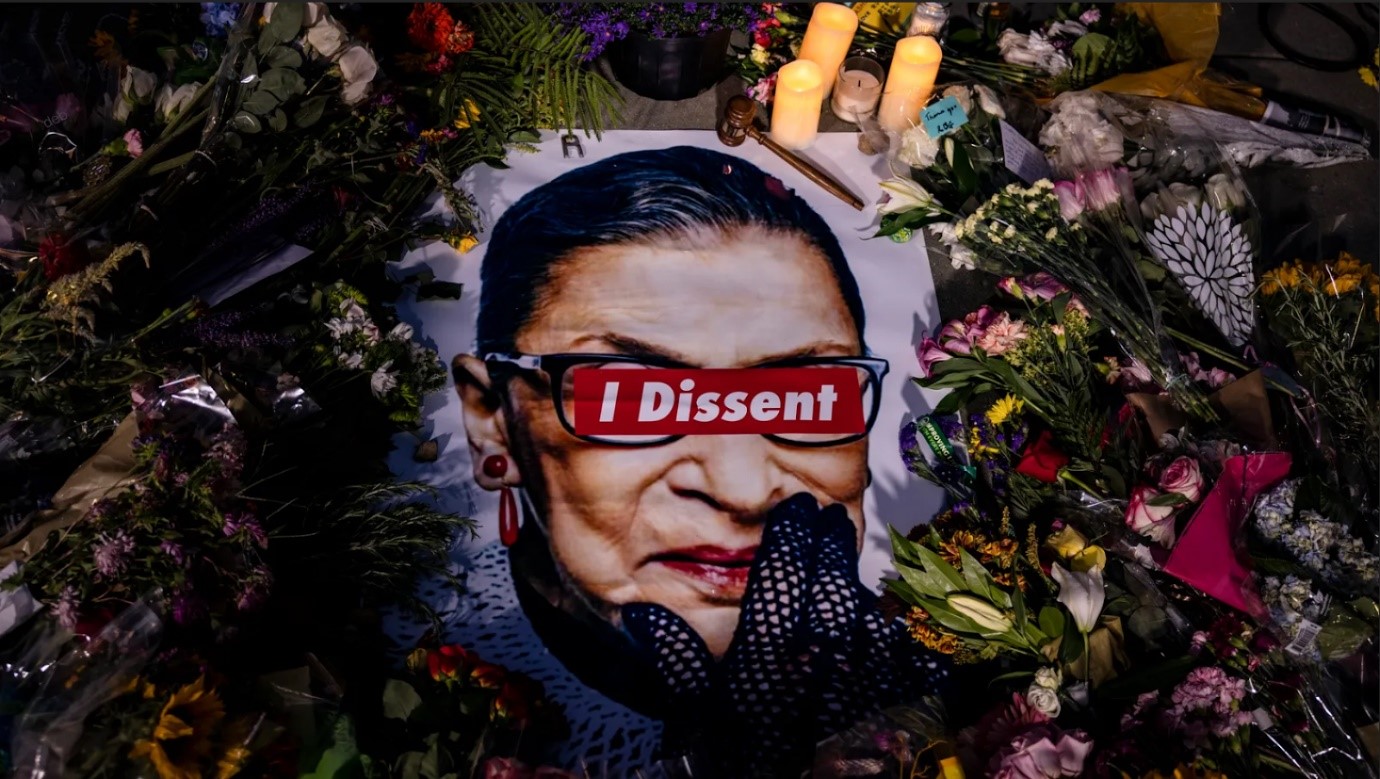 “Thank you for holding on as long as you could.”

It is rare for people outside of entertainment, sports and politics to sway any public emotion. One such extraordinary incident was witnessed on 19 September 2020, when thousands of people swarmed the US Supreme Court at Washington, to pay their last respects to Ruth Bader Ginsburg. Ginsburg, a human/gender rights lawyer turned judge, served as an associate justice of the US Supreme Court for nearly 3 decades. Her career in litigation is proudly remembered as a selfless service for human rights, owing to her efforts in a series of cases arguing for removal of discrimination and promotion of gender justice as part of her body of work with the Women’s Rights Project at American Civil Liberties Union (ACLU).

As a moderate judge of liberal views, Ginsburg demonstrated remarkable fortitude while staying true to her principles, in a setting dominated by conservative leaning colleagues. In her long stint as an Associate Justice, Ginsburg is revered for her decisions as well as dissent opinions in landmark cases which have shaped modern interpretation of laws pertaining to gender rights and equality.

When Ginsburg took seat at the Supreme Court of the United States (SCOTUS) in 1993, there was a visible split along ideological leanings. The conservative wing was in majority of 6-3 and 5-4 through most of her term. She climbed to prominence owing to her efforts in uniting the liberal wing of the SCOTUS, and authoring several incendiary dissenting opinions. One such notable rebellious opinion came in the landmark case of Shelby County v. Holder.

The case was set up to examine the constitutionality of the Section(s) 4(b) and 5 of the Voting Rights Act of 1965. The instant provisions required state governments to obtain federal preclearance before making amendments to issue fresh demarcations for mapping out voting constituencies, which were notorious for discrimination in voting rights. In a controversial judgement by a majority of 5 against 4, the provisions of Section 4(b) were read down on count that the data which was being used to determine the said demarcations was nearly 40 years old. The abrogation of Section 4(b) by itself vitiated Section 5 of the Act, even though it was not expressly removed.

The judgement was largely seen as ideologically motivated. The process of obtaining federal clearances had remarkably made way for scores of minorities, and ethnic groups to participate in the voting process in the U.S. Research based on the voting rights and participation demonstrated that preclearance was directly proportional to an increase in minority voter participation. In light of Shelby County, as many as around one thousand polling stations (predominantly comprising of African-American electorate) were closed. There is also a direct relation between decrease in polling stations and decrease in voter turnout.

In her famous dissenting opinion, Ginsburg reasoned that by virtue of the judgement, the SCOTUS was effectively reversing the wheels in a field where significant progress was achieved. Ginsburg argued that the judgement could not corroborate as to how the coverage formula based on a 40-year-old assessment of population was redundant in recent times. She stressed that the basic right to vote was envisaged in the Fifteenth and Nineteenth Amendment, and that the judgement runs contrary to the ideas of protecting  the integrity of the democratic process in federal elections. She noted that:

“…throwing out preclearance when it has worked and is continuing to work to stop discriminatory changes is like throwing away your umbrella in a rainstorm because you are not getting wet.”

Her renowned dismissal of the majority opinion became a talking point among the general public, while she herself emerged as an icon in pop culture, donning the tag of “The Notorious R.B.G.”, and became the subject of several memes which were directed at questioning the authority.  Ginsburg went on to author several other differing opinions at a time when the SCOTUS was compromised in its ideological loyalty and split along party lines. Through her constant efforts of remaining true to democratic and liberal principles, while continuing to unite the liberal wing, she flared as a champion of fundamental human rights.

Human Rights have been discussed on several occasions in the Courts of the USA. Ginsburg, who also happens to be the second woman to serve the highest court of her land, was an advocate of human rights throughout her life. She’s proudly called the champion of “race and gender equality”. Before climbing to the highest seat of law in her country, Ginsburg had already ingrained her charm in the fraternity of law. Years of discrimination against women’s admissibility to a military institute in Virginia, was ruled unconstitutional by her impeccable reasoning. Her age did not hold her back from acknowledging the youth’s demands against historical injustices, be it against women, LGBTQI+ community or immigrants, for that matter. In Bostock v. Clayton County, by amending the discriminatory laws against gays, lesbians, transgenders and women at the workplace, she uprooted the social stigmas that were embedded in law for years against these communities.

It’s not just what Ginsburg did after becoming a judge of the Supreme Court of the USA; it’s what she’s been doing since her school days that has left an indelible mark on people all over the world. When the United Nations Organization was incorporated, she was driven by the vision behind the United Nations Charter (UN Charter) in promoting peace, security and equality in the international community.

The list of Ginsburg’s exemplary work in the field of civil liberties is quite long! Martin Ginsburg, her husband, too, has praised her noteworthy work in the past. In his words, “her good job and place in history began with a tax case involving a dependent-care deduction denied a single man who was caring for his aging mother; Moritz v. Commissioner of Internal Revenue Service”.

Being a woman who fought against the orthodox restrictions of her Jewish community from the age of four, Ginsburg always performed as the “achiever”- one who made it happen for herself against all odds. It wouldn’t be wrong to say that Justice H.R. Khanna, one of the renowned justices from India, has a lot in common with Ginsburg. As rightly opined by Justice DY Chandrachud while overruling ADM Jabalpur:

“When histories of nations are written and critiqued, there are judicial decisions at the forefront of liberty. Yet others have to be consigned to the archives, reflective of what was, but should never have been.”

Justice H.R. Khanna’s dissenting opinion in the infamous ADM Jabalpur case for protection of personal liberty under Article 21, is akin to Ginsburg’s endless efforts for protecting civil liberties of the people, during her lifetime. Even though dissenting opinions do not form a binding precedent, they nevertheless stand out as a persuasive authority, and an alternate mechanism whenever the current scheme is revisited. There have been several bad judgements across jurisdictions in the past which have upheld discriminatory laws based on prejudiced opinions of the authorities. However, it is due to the efforts of true patrons like Ginsburg and Justice Khanna, who fearlessly voiced against these injustices, left an indelible mark of professional veracity in a demanding environment, and opinions which resonate with people decades later. Unfortunately, the Indian Judiciary today lacks a Khanna or Ginsburg equivalent.