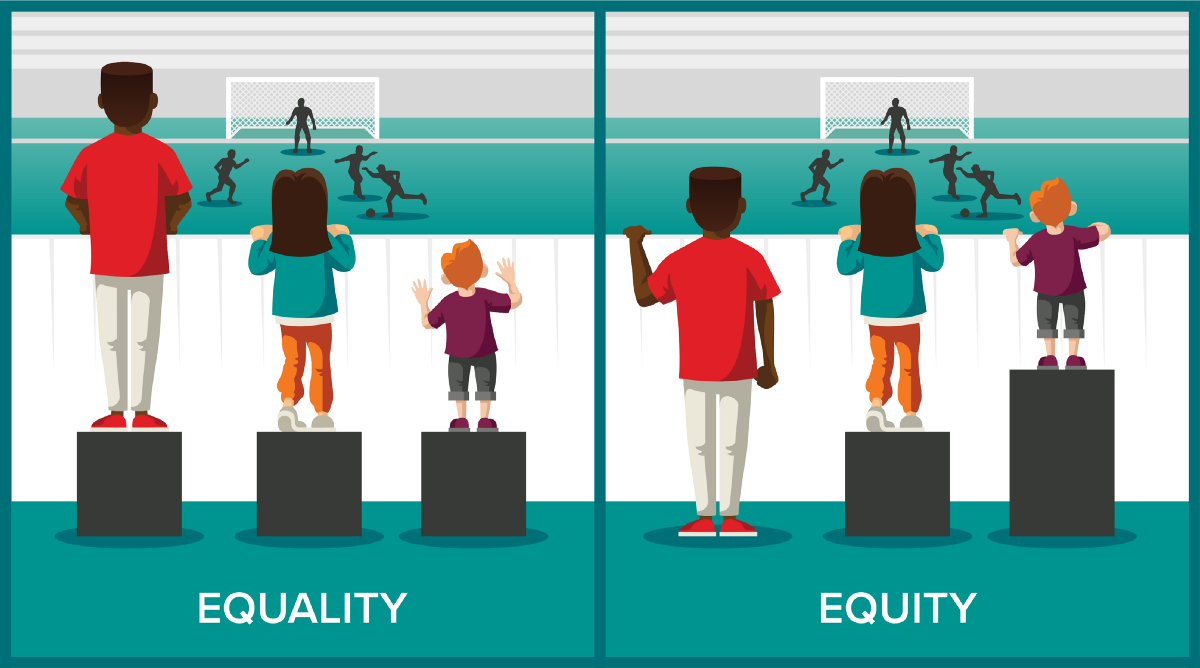 Luck Egalitarians consider social and economic inequality to be the primary hurdles obstructing the achievement of true justice and equality. The disparity and mismanagement in the proper distribution of resources in our societies attribute to the root cause of such inequalities. This theory identifies many types of inequalities such as deprivation of adequate standard of living, economic marginalization by denying labor that generates income, exploitation, etc. This article attempts to interpret the basic postulates of ‘Luck Egalitarianism’ while further discerning its role in the development of the Right to Education in Indian Jurisprudence.

The Evolution of Luck Egalitarianism

Luck Egalitarianism emerged as a theory against the idea of utilitarianism which primarily focuses on the majority idea of greater happiness for the greatest number.[i] Utilitarianism completely ignores the true essence of equality and does not pay attention to how resources have to be divided among the society to achieve equality in a true sense.[ii] In contrast to this, political philosopher John Rawls argued that the social inequalities already existing like poverty or other forms are essentially unjust and need to be excluded before trying to attain equality and justice in the true sense.[iii] Rawls argues for removing both types of injustices for true equality i.e. inequality because of social circumstances or natural talents. Post Rawls, several other liberal egalitarian theories took his idea forward while emphasizing injustices owing to differences arising because of mere luck which translates to natural or social inequalities.[iv]

Luck Egalitarianism prescribes an idea of justice in which the task of compensating those who have undeserved poor luck, naturally without any choice (poverty, disability, and social backwardness) becomes a fundamental aim of equality. Rawls opposes the idea of formal equality of opportunity on the ground that it fails to take into the differences in class, gender, and race. He argues that the institutions, opportunities, and positions available in the society must be open to everyone who can strive and are willing for them and their socio-economic conditions must not stop them from giving a fairly equal chance against others placed at a comparatively better position.

This idea was supplemented by jurist Ronald Dworkin through his division of ‘luck’ into two types i.e., brute luck and option luck.[v] He argues that affirmative action on equality should only work on removing the effects of brute luck which lies outside the hands of the victim while rejecting such protection for option luck which is chosen by the individuals themselves. His theory revolves around the idea of ensuring that such brute luck does not reflect in the person’s fortune arbitrarily and that the circumstances for that individual or group have to be changed. This approach saves people from the arbitrary impact of fortune by trying to compensate for unavoidable losses.[vi]

Legislative Application of Luck Egalitarianism on Right to Education

Right to Education can be viewed as one of the most important facets of justice through which the existing luck inequalities could be addressed, as well as a society could achieve equality in a true sense. Interestingly, equality in education is a complex issue that has been experimented with by several approaches to attain justice and equality. The basic idea that is generally attached to equality in education is that every child is entitled to receive an equally decent education, which completely ignores its substantive counterpart. The problem of inequality cannot merely be solved by providing formal equality of opportunity and removing discrimination. It further requires some positive action to uplift those who have been the victim of ‘brute luck’ as classified by luck egalitarians.

When we apply Luck Egalitarianism to the idea of equality in education, it implies that the sole factor of luck should not determine whether a person should be placed educationally well or not. This further portrays that an egalitarian approach towards education would work towards setting up structures to compensate, ameliorate or neutralize the negative impacts of luck on the proper distribution of educational resources. The main goal of this approach would be to ensure that educational inequalities should not arise out of differences in an individual’s social background, ethnicity, sex, or natural talents.

Indian jurisprudence on the Right to education follows the idea of Luck Egalitarianism as it provides both formal and substantive equality by providing free and compulsory education equally for all and also provides for affirmative action by providing reservation for socially and economically backward classes in all public institutions.[vii]

The Constitution itself provides for various positive measures in the form of fundamental rights and directive principles of state policies.[viii] While Articles 15 and 16 strive to bring about equality through affirmative action, Article 41 puts an obligation on the state to make effective provisions for securing the right to education within the limits of its economic capacities. Additionally, Article 45 as substituted by the 86th Constitutional Amendment, now provides for an obligation on the State to ensure education and early childhood care for all children up to 14 years. The application of Luck Egalitarianism is further evident in Article 46 which provides for the promotion of education for weaker sections of the society such as scheduled castes and scheduled tribes. Interestingly, this right also finds its place among fundamental duties where-

After the 86th Constitutional Amendment, the Right to Education has been granted a status of a fundamental right in India that obligates the State to provide free and compulsory education to all the children belonging to the age group of 6-14 years of age. Apart from the above discussion, the basic idea of removal of brute luck for achieving true equality as discussed by Dworkin and other luck egalitarians found its application in the Indian Constitution through the 93rd Constitutional Amendment Act of 2005.[ix] This act instituted clause 5 of Article 15 which gives the power to the state for making special provisions for the advancement of educationally and socially backward classes by providing special provisions for their admissions in all educational institutions apart from those who belong to minorities under Article 30(1). Both of these amendments found their implementation through the Right of Children to Free & Compulsory Education Act of 2009 which provided for substantive equality of education to all the children through affirmative actions on the part of the state by aspiring to make education accessible even to the lowest strata of the society. [x]

The idea of Luck Egalitarianism, which obligates the state to ensure educational equality to all, has also been followed by the Indian judiciary in many cases. Right to Education was first recognized as a fundamental right flowing directly from Article 21 in Mohini Jain v. State of Karnataka which held that charging of higher capitation fee is a violation of such right as along with Article 14 it arbitrarily denies the opportunity to education.[xi] This view was partially accepted in the case of Unnikrishnan vs. State of Andhra Pradesh where the Court although affirmed the right to education as a fundamental right, restricted it only to the children belonging to age less than 14 years.[xii] Interestingly, this idea was again differed by a numerically superior bench in the case of TMA Pai Foundation v. State of Karnatakawhich held all the orders issued by governments in the wake of Unnikrishnan judgment as unconstitutional while bringing the concept of education under the domain of occupation as defined under Article 19(1)(g).[xiii]

In TMA Pai, the Court opined that the framing of scheme relating to admission criteria and fixation of college fee as done in Unnikrishnan was incorrect as the institution was private and unaided, hence, retaining some amount of autonomy to conduct their affairs was a part of freedom of occupation under Article 19. This case also recognized the rights of minorities to establish and maintain educational institutions under Article 19(1)(g) and Article 26 or under Article 30(1). Furthermore, in the case of Islamic Academy of Education vs. State of Karnataka, the Court ruled that the management in a private unaided professional educational institution has the complete autonomy to admit students and fix fee structures that are reasonable to cover expenses and further develop the scope of education in that institution.[xiv]

Moreover, in Pramati Educational and Cultural Trust v. Union of India, the Apex Court specifically approved the approach of substantive equality through affirmative actions by upholding the validity of Article 15(5) instituted by the 93rd Amendment to the Constitution.[xv]  It overruled the judgment of Society for Unaided Private Schools of Rajasthan v. Union of India by excluding all minority educational institutions whether aided or unaided from the purview of the Right to Education Act of 2009.[xvi] This development was a major step in removing the brute luck factor from the lives of socially and economically backward students who were earlier denied admission in quality government as well as private institutions merely owing to their luck. After the judgment, such students were provided reservation in admission in private as well as government schools under the scheme of Right to Education Act, 2009. Lastly, an important addition to luck egalitarian idea of the Right to Education was also portrayed in the case of Bandhua Mukti Morcha vs. Union of India, wherein the SC directed the Central Government to take positive steps for ensuring basic education to children working in factories and industries.[xvii]

After a careful study of Luck Egalitarianism and the Right to Education in India, we can conclude that Indian jurisprudence on the Right to Education has evolved with time and has taken several steps to remove deeply embedded social inequalities from its roots by providing compensation to the victims of brute luck in the form of affirmative action such as reservations for the weaker section and free education for all. Through policy and judicial precedents, Indian jurisprudence has recognized the persisting socio-economic inequality emanating from various factors and has created a decent model for the reduction of such inequalities which adheres to the luck egalitarian idea of justice and equality. Although, the proper realization of this right is still far away, the sustenance of continuous efforts is the only way to reach that point one day in the future.